Baseball Week In Nanaimo culminated with barnburner of a ball game.

The stands and the beer gardens were filled up for the exhibition and fans were treated to a wild one as the home team went up 4-0, fell behind 5-4, then went back ahead 7-5 before settling for a draw after nine innings.

“It was a good atmosphere,” said Griffin Andreychuk, who played shortstop for the Nanaimo all-stars. “We haven’t had a turnout like this, which is cool to see.”

Andreychuk said there’s a lot of good baseball games for people to catch in Nanaimo.

“It’s something fun to watch … People maybe take it for granted,” he said. “It’s cool to have an old historic park like this … It is beat up and it is what it is, but it has a chance to be probably one of the best ballparks in B.C. if some money gets raised and put back into it.”

RELATED: Blue Jays come out to the ballpark in Nanaimo

The Serauxmen Stadium Amateur Baseball Association, which is working toward improvements at the ballpark, organized the week’s events.

“It couldn’t have gone better…” said Lorne Goodall, the group’s president. “[It was] nice to see the turnout tonight, lots of old baseball people came out that we haven’t seen in a long time. It was really nice to see the positive energy in the stadium.”

The announced attendance was more than 1,000.

Goodall thanked the community for its support, all the businesses for their sponsorship, and the contributions from the Serauxmen and Rotary clubs. 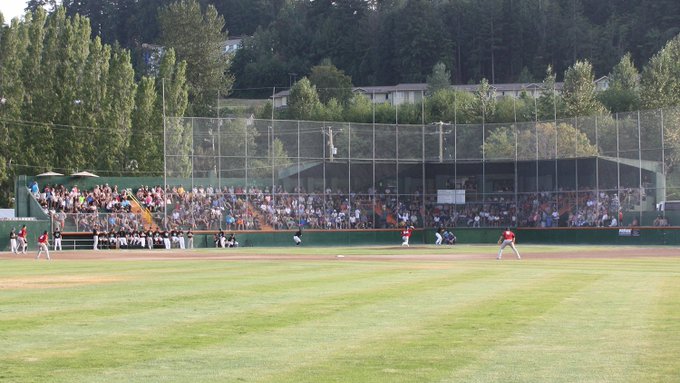 More possibilities could be on the horizon for Rotary Bowl and Serauxmen if a sale to the City goes ahead.

More possibilities could be on the horizon for Rotary Bowl and Serauxmen if a sale to the City goes ahead.Spencer Sterritt/NanaimoNewsNOW

NANAIMO — A deal described as a win-win for everyone involved could unlock the potential of two major pieces of sport infrastructure in the heart of Nanaimo.

The City of Nanaimo has a deal in place to buy nearly 15 acres of land between Third St. and Fourth St. from Nanaimo Ladysmith Public Schools. The $4.1 million sale would include Rotary Bowl and Serauxmen Stadium.

“We’re not in the business of maintaining those kinds of fields…our gig is schools and education,” School Board chair Steve Rae said. “It was very important to us that it remained as is and in the community…they (the City) have the ability to make it better and use it more effectively and we still manage to use it for our students. We’re thrilled.”

As part of the agreement, the City and school district will split the cost of a $2.4 million lighted, multi-use turf field at NDSS. That field will be available for both school and City users.

“We need more field capacity,” said mayor Bill McKay. “The school board didn’t have the resources to participate in an upgrade of the entire facility.”

McKay said there is massive potential in the location looking years down the road.

“I’d like to see it reconfigured…a long-term commitment would be when the school district gets the go-ahead to do a rebuild of NDSS, that we could reconfigure that property that we’ve purchased. I’d like to see a new stadium, a new baseball park, something that’s upgraded. I think there’s a lot of interest in the community,” McKay said.

The two principle users of Serauxmen and Rotary, Nanaimo Minor Baseball and the Track and Field Club, will now be able to plan with some certainty for their futures, according to Richard Harding, the City’s director of Parks and Rec. He said the groups can now focus on capital improvements and growth because they will have some assurances they will have a home moving forward, something that doesn’t exist under the school district’s management of the site.

Harding also expects the new NDSS turf field will get well over 2,000 hours of use per year. A city release states that field should be ready to use in the fall.

The land represents a “prime location” for a central area for recreation in the city, according to Coun. Ian Thorpe.

“I think the city is in a better position right now than possibly the school board to develop those facilities and make them better than they are now,” Thorpe said.

The sale still needs final approval from the school board and the Ministry of Education. Rae said there will be a public consultation process before the board signs off on the deal.